Friends make life worthwhile. They’re there to lift our spirits when we’re down, teach us lessons and just make life more enjoyable.

Friendship is fantastic but it’s not always easy, and sometimes, you find yourself missing an old friend. Perhaps y’all grew apart, maybe something happened that split you up or time just got in front of the friendship. Whatever the reason, sometimes it’s not too late and it’s not impossible to reconnect with someone you stopped talking to especially if they were a good friend and you miss them.

Why you should reconnect with old friends

There are many reasons why you should reconnect with old friends, here are a few:

1. You have a history with that person

Old friends knew an older version of you. They remind you of where you’re from, who you used to be, and even how much you’ve grown as a person.

2. They “get” certain parts of you

Inside jokes that bring a hint of nostalgia? Old friends will give you that.

Sometimes people change profoundly with time. It’s nice to know how/if that friend has changed and what road of life that person has traveled.

It is possible to rekindle friendships. I say this from experience.  You have a past, and by reconnecting with someone you used to talk, you can rekindle that friendship for the future.

How to reconnect with someone you stopped talking to

2. Draft up what you will say

Whether you’re reaching out to them via a Facebook message, text message, or a phone call. It’s best to be prepared. What will you say? What points do you want to get across? How will you contact them?

Be straightforward, and don’t ramble.

Here are some examples of what to say to reconnect with old friends: 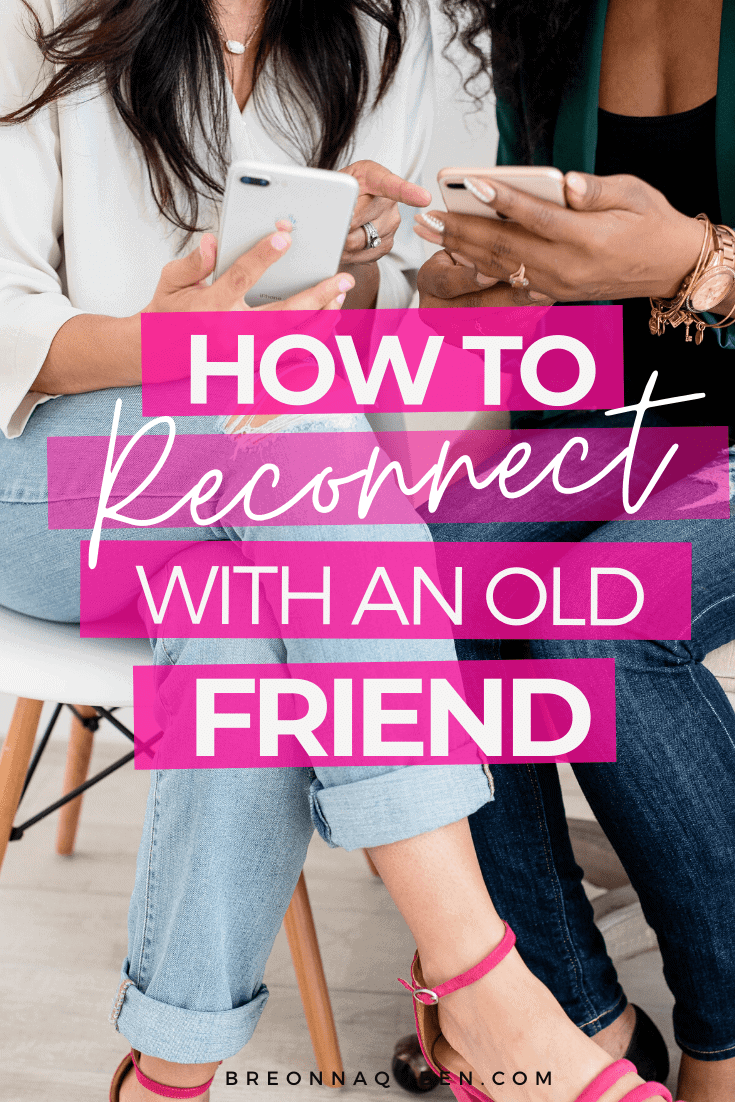 When reconnecting with someone you use to talk to, it’s vital to have realistic expectations. Don’t assume that once you reconnect, you will be back to being besties like old times. Time has passed. People change. Your reunion may not go as perfectly as you plan.

Don’t expect. Reconnecting with an old friend doesn’t mean you will rekindle back to the best of friends or even friends like old times.

5. Apologize if need be (and don’t expect an apology)

Sometimes friendships ended because of wrong-doings. Address those serious issues, and sincerely apologize if you screwed up.

While you can’t control if someone forgives you, you can say sorry and hope for the best. Apologies can restore friendships.

Additionally, if a friend has hurt you in the past, don’t expect an apology from them or try to force them to apologize.

Make plans to reconnect and catch up. This can be as simple as asking them if they would like to go out for drinks and provide a date/time to see if they’re free.

People who want to reconnect will put forth an effort. I had an old friend tell me they would be in town and would love to catch up during drinks. I agreed, and we had a wonderful time.

7. See the good in goodbye

I have had many friends. Some lasted, and some did not. Some friends I’ve been able to reconnect with and others I have not. Some have wanted to reconnect, and I did not (I simply didn’t miss their presence).

There are seasons and reasons for friendships. Sometimes you have friends simply because of proximity and common similarities (i.e., such as college friends or work friends). Once that phase of your life is over, you fall out of touch because you no longer share that common similarity.

Be okay with that. Every person is not meant to travel throughout life with you. Be grateful and appreciative of the time you spent together and move forward.

If you reach out, and they don’t respond, or they decline, respect their wishes.

Sometimes you have to see the good in goodbye. Know that goodbye is a gift because it allows you to say hello to new experiences and people.

Ignore all the stories in your head about people not caring, being too busy, or not wanting to reconnect with you before you even try.

The majority of people will be happy that you reached out to them and want to reconnect. Wouldn’t you?

If you have been thinking about reaching out to an old friend for a while but keep putting it off, it’s time to just do it.

A few years ago, a good friend and I grew apart. I wasn’t the best friend to her when she needed me to be, and I missed her dearly. I kept putting it off and figured she didn’t want to hear from me ever again, but finally, I reached out. I sincerely apologized, told her I missed her, and asked if she could forgive me?

I would love to tell you that we became instant besties after that, but we didn’t. It took years to rebuild our friendship back up, but I’m so happy we reconnected. I ended up being a bridesmaid in her wedding and I’m now planning her baby shower for her firstborn. This is all because I simply I reached out to an old friend and who I wanted to reconnect with and genuinely missed.

It’s may not be too late to reconnect with someone you stopped talking to… but first? You must try.

I asked some of my friends to give their advice when it comes to how to reconnect with someone you stopped talking to… here’s what they had to say:

Be open and honest with them and really get into what went wrong… like address the issues and go from there. Most friendships can be saved or rekindled by a simple conversation.
-Brandi O’neal

Say something along the lines of “you been on my mind lately” or “you came across my mind”. “How’s everything going, what’s been up?” And then turn that into hitting them up a little more consistently.
-My friend, William Thomas

Be mindful that life runs it’s course during your time a part so don’t expect to interact in the same way you did previously. Approach it as organically as possible starting with pleasantries and being genuinely interested in whatever their state of life is now.
– Jessica Gardner

Say what you feel and let it go from there. Do not force it. Allow things to organically happen.
– Heather

Know that both people just have to feel like it’s worth saving. Never beg people to be in your life. Reach out to see if they’re open to it and if not then respect it. You may have hurt them beyond repair or maybe they don’t value the friendship in the same way you did (or the opposite they valued the friendship more than you did at that time).
-Brandi O’neal

Friendship can sometimes be tricky, but it doesn’t have to be complicated. If someone was a good person and an important part of your life, it’s okay to reach out to them and want to reconnect. Some of my most powerful friendships have come from being open to reconnecting as well as being open to reaching out.

In my next post, I’m sharing how to make new female friends as a grown woman. 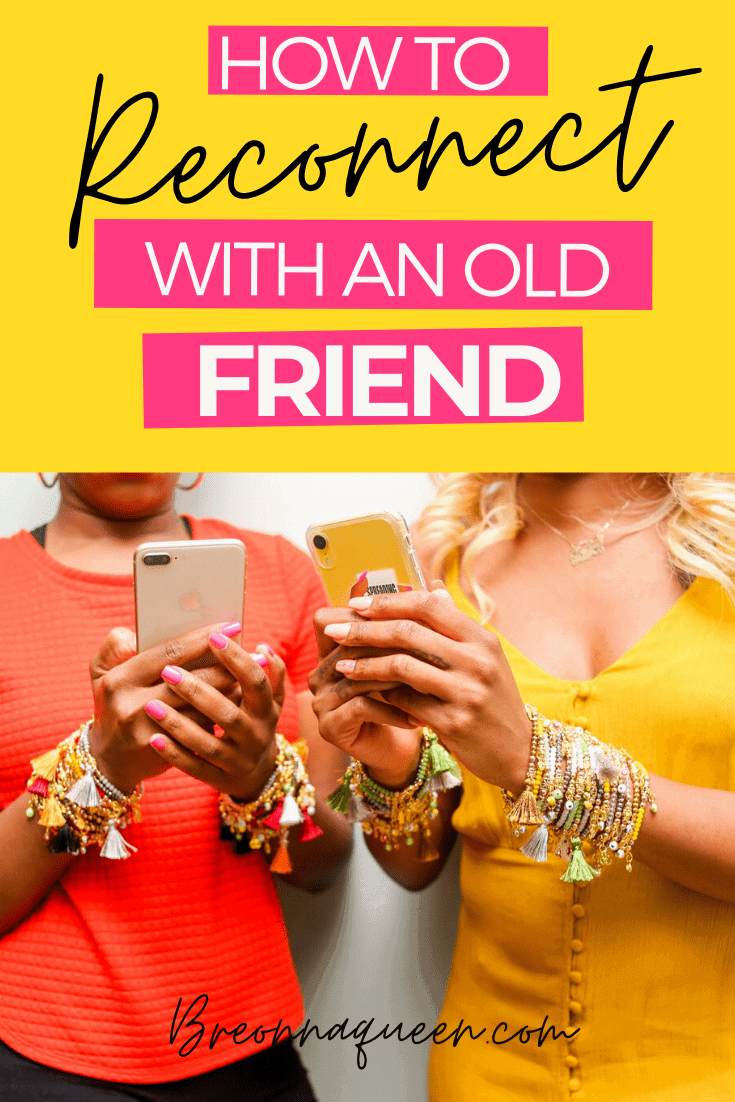 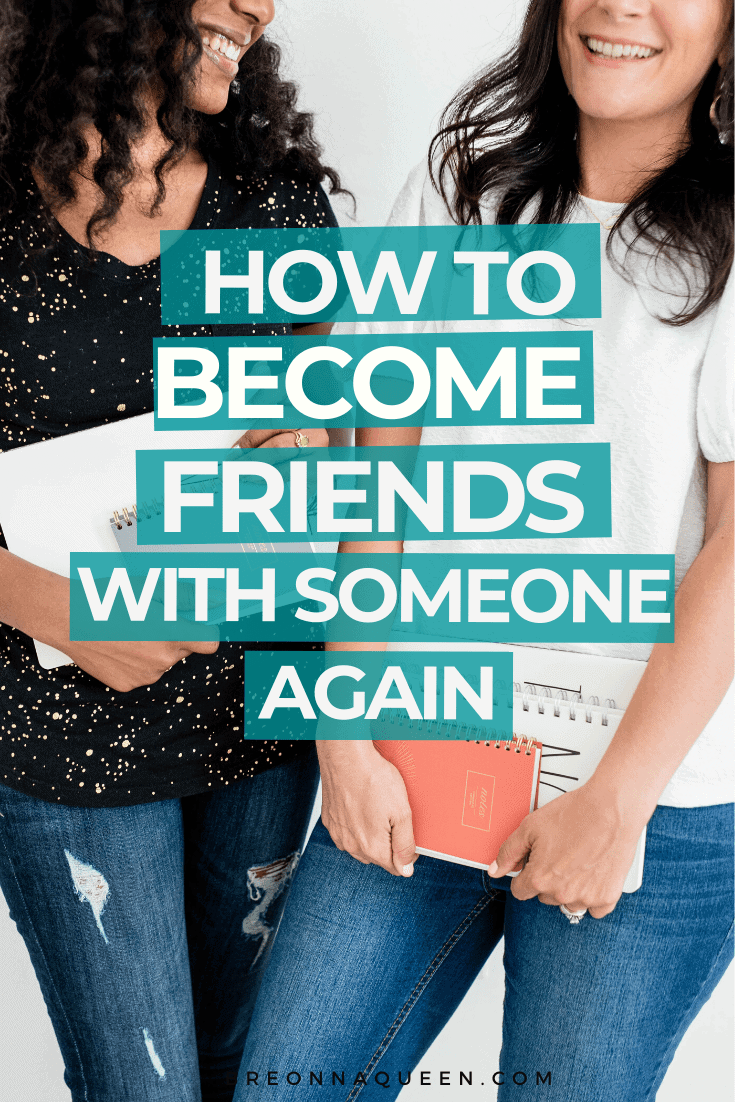 I help you create ever-green, money-making videos so you can earn more & do more of what you love!
Read my story →